Posts in the All Then & Now Posts category


Alvey was built in 1989, next to Goolrick Hall. Originally known as North Hall, the dormitory was officially named after Edward Alvey Jr, Dean of the Faculty from 1936 to 1971. With its opening in 1990, Alvey helped relieve overcrowding pressure which had been building in many of the other residence halls. It is identical to Arrington Hall, which was built in 1994.1 The 148-room dorm has a more modern style than some of the older residence halls and includes features such as air-conditioning. This garnered Alvey the title of “‘The Hilton of the campus'” in The Bullet at that time.2


Arrington was built in 1994, near Alvey. Dubbed “New Dorm” in its early days, the dormitory was officially named after Arabelle Laws Arrington, Class of 1941, who was an avid supporter of Mary Washington. It too helped relieve overcrowding pressures in many of the other residence halls across campus. It is almost an exact copy of its neighbor Alvey Hall, which was built in 1989. The 148-room dorm has a more modern style than some of the older residence halls and includes features such as air-conditioning. Arrington holds the unique position of being “the last dormitory constructed on campus in the College’s  first century.”1


As quoted in University of Mary Washington: A Centennial History, 1908-2008, the 1977 Bullet described Ball Hall as “The home of sophisticated girls, mostly seniors and lucky underclassmen…who act with a touch of class. Some noses are carried so high that…they are in danger of drowning in heavy rain.”1

Ball Hall, originally named Mary Ball Hall after George Washington’s mother, was completed in 1935. This dormitory is the central building in a tri-unit dorm structure that included Madison and Custis Halls on either side of it. Located right on Ball Circle across from Virginia Hall, this dormitory  possesses an elegance that is lacking in newer, purely utilitarian dorms; Ball Hall boasts a grand entrance with a large reception area,  a circular stairway extending to an amber skylight three floors above, and two fine parlors illuminated by crystal chandeliers and wall sconces. 2 Today, Ball Hall houses 105 women, second year or above, in double occupancy rooms with suite baths.3 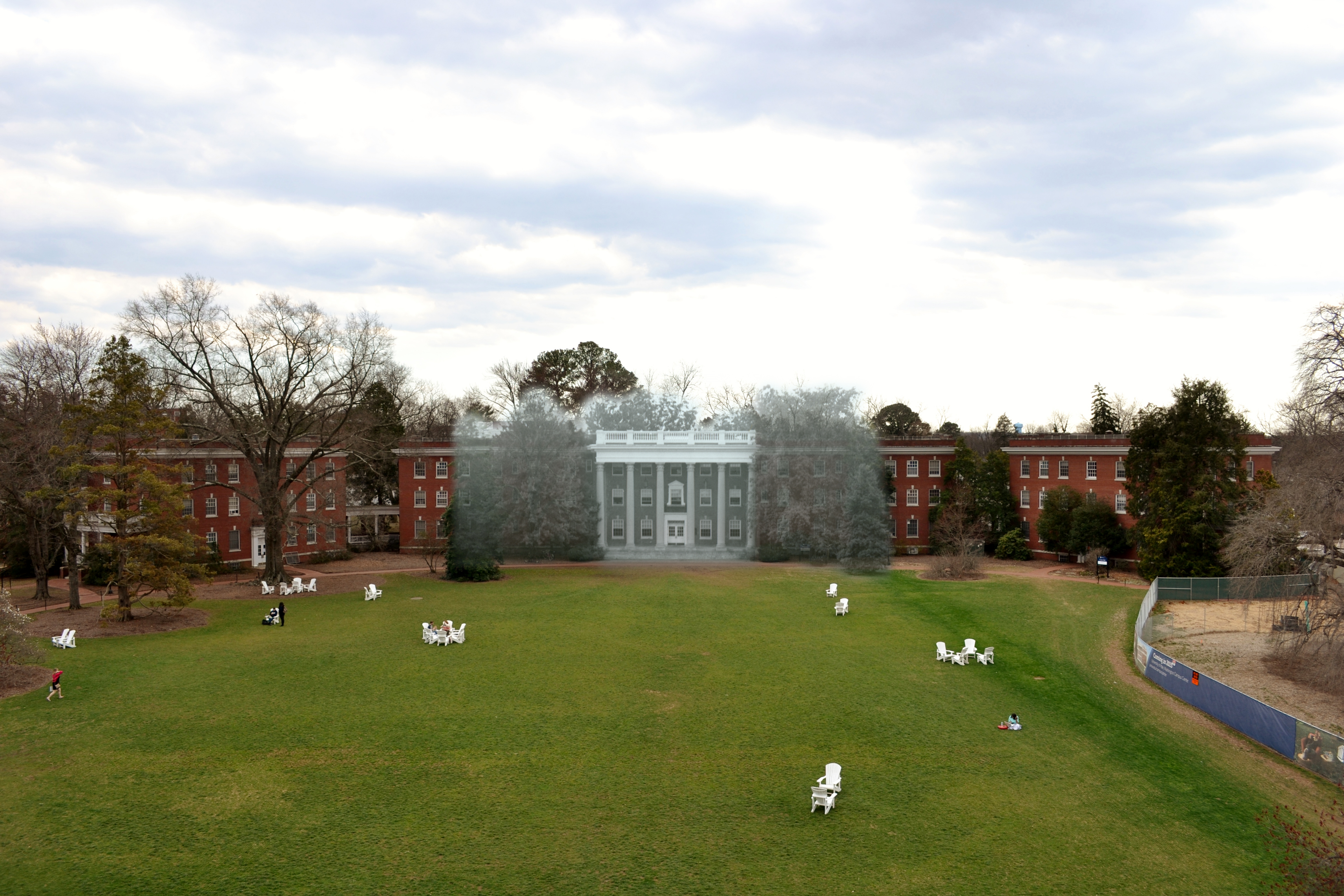 
The Bell Tower was built in 2007 from the donations of John Chappell, a friend of President William M. Anderson. Also known as the Carmen Culpeper Chappell Centennial Campanile, the tower is the tallest structure on campus, measuring 88 feet tall. The money was donated in the memory of his wife Carmen Culpeper, who was a graduate of Mary Washington. 1 A small garden is located at the base of the tower with a garden and fountain dedicated to her class, the class of 1959.2 The tower was a symbolic and sentimental project as it was constructed in the last year of President Anderson’s career at UMW. As part of the graduation procession, the class of ’07 walked out through the arches of the Bell Tower. Before the beginning of the following fall semester, the incoming freshman class walked through the arches of the structure, symbolizing new beginnings.3


As noted in University of Mary Washington: A Centennial History, 1908-2008,  “in 1944 the College had purchased for $50,000 a brick residence located diagonally across from George Washington Hall.”1 The house was named Brent Hall in honor of Margaret Brent, an Englishwoman who came to America in 1638. 2 Margaret Brent eventually acquired “the site of what would become Fredericksburg.”3 From 1944 to 1947, Brent House served as the President’s home. After that it was the French language house residence hall, and then was “converted to administrative office space.”4

Today Brent House is where Emergency Management and Safety and the University Police are located.


Bushnell Hall was completed in 1959 and could house up to 144 students. It was named after Nina Bushnell, a former dean at the College. As noted in University of Mary Washington: A Centennial History, 1908-2008, Bushnell Hall was also the “first dorm to house students from all four classes in the same building.”1

On December 5, 1980, Bushnell Hall caught on fire.2 Fortunately, none of the residents were injured, but the fourth-floor residents did need temporary alternative housing due to the damages caused by the fire.3 Bushnell was able to reopen in January for the start of the spring semester.4 The total cost of repairing the residence hall was “approximately $80,000.”5

Following the reopening, lighter incidents occurred in Bushnell Hall such as the scandalous “male strip tease shows” that took place throughout the 1980s.6 As quoted in University of Mary Washington: A Centennial History, 1908-2008 a 1984 Bullet review entitled “Bushnell Bares the Beef,” described “‘MWC’s own ‘Chippendales’ hopped about…sporting black pants, bow ties and glistening muscular chests,’” they were “egged on by cries of ‘Take it off!’”7


Campus Walk is a central brick walkway which runs almost the entire length of campus, starting at the Bell Tower and Double Drive in the south and ending at Goolrick Hall on the north end of campus. It passes in front of most major buildings at UMW, including George Washington, Trinkle, Lee, Monroe, and Jepson. Most residence halls are only a short distance off of Campus Walk, if not directly on it. The bricked walkway merges into Palmeri Plaza in front of Monroe and then continues down in front of the Woodard Campus Center. This covered walkway lasts until just before Simpson Library. Campus Walk continues in front of Simpson and, once construction is complete, will run through the Convergence Center and out towards Jepson. Much of what is now campus walk was originally an asphalt road, Campus Drive, which ran from College Avenue to Monroe and then back down the hill towards Sunken Road. Remnants of this road remain in what is now Double Drive on the one end, and the Sunken Road access which comes to a circle between Lee Hall and Monroe Hall. Work began in 1986, when Campus Drive was closed to through traffic and covered with the bricks it has today.1


The May Day celebration used to be one of the grandest events at UMW, especially when it was still an all-girls school. The first May Day was held in conjunction with the Field Day games in the Spring of 1914 on the lawn in front of Monroe Hall. In 1923, the event was moved to the amphitheater located behind Trinkle Hall and next to Marye Hall. The celebration would begin with a processional led by the May Queen and her attendants, Senior Maypole dancers, and then the classes followed in order wearing their color. 1 After the May song, the Queen was crowned and the seniors performed the Maypole dance. In the late 1960s, the tradition fell out of favor, as an antiquated event. By 1968, with “the war, divisive camp politics, and rabble-rousing, Bullet editorials, our attention was obviously directed elsewhere…May Court was trivial in comparison.” 2 1968 was the last year to see a May Day at the University. In January 2001, several clubs, led by the Inter-Club association and French Club tried to revive the tradition but with marked changes. The revival never really caught on however, and the May Day tradition still remains an event of the past.
Today, other celebrations have taken the place of May Day. One such celebration is Holi, the Indian celebration of the arrival of spring and the passing of winter.3 The celebration is traditionally held on Ball Circle and hosted by the UMW International Living Community. Participants wear white and dried paint is passed out to be thrown into the air for a simultaneous burst of color.