Posts in the no date category 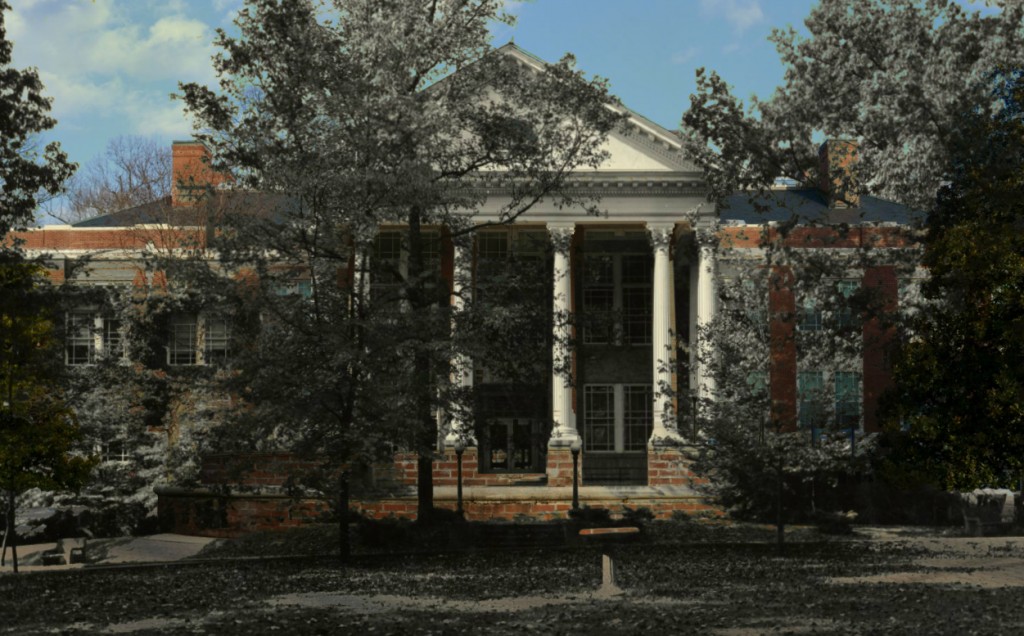 
In 1941, the E. Lee Trinkle Library opened and “remained the College library for a half of century, until the expanding collection necessitated larger quarters in 1989.” 1  According to Dr. Crawley’s University of Mary Washington: A Centennial History, 1908-2008, “Pride in the beautiful new building was such that students and faculty immediately adopted the practice of scrupulously not stepping on the College seal on the rotunda floor.” 2  While that tradition has faded, today’s students still treasure the building.  Today Trinkle Hall is home to the Mathematics, Religion, Philosophy, Computer Science, and Classics departments, as well as the College of Education.


Monroe Hall was founded in 1911.  It was one of three original buildings built for the State Normal and Industrial School for Women, the first incarnation of the University of Mary Washington. The building currently functions as an academic building, and houses the History, Geography, Political Science and International Affiars, Sociology, and Anthropology Departments.  Notably, murals by retired faculty member Emil Schnellock adorn the building’s walls on the second floor. 1  Monroe has been renovated multiple times, and was most recently reopened for the 2011-2012 academic year. 2

Directly in front of Monroe today lies what students commonly refer to as the “Monroe Fountain.” The brick area around the fountain which connects Monroe Hall with Virginia Hall and Willard Hall was named Palmieri Plaza in honor of Richard Palmeri. Richard was a greatly esteemed Geography professor at the school who succumbed to cancer in 1997.3 The area is a central part of campus and is one of the most traveled places at the university.


Virginia Hall, named after the Commonwealth of Virginia, was constructed in 1915 and is the second oldest residence hall on the campus.1 The building was an integral part of the “Daisy Chain” tradition. A chain consisting of thousands of daisies was carried on the shoulders of two-year diploma graduates during Class Day ceremonies. Virginia Hall served as the ultimate resting place for the chain, where it was to remain throughout the graduation ceremonies. This tradition continued through 1942, after which date the school stopped awarding two-year diplomas.2


Westmoreland Hall was completed and ready for students in 1939. 1   The residence is located next to George Washington Hall, the administrative hub of campus and across from Randolph and Mason residence halls. With the addition of male students to the University in the early 1970s, Westmoreland served as home to some of the overflow of males in need of housing. In the fall of 1975, it was turned into a coed dorm. 2 After this proved a success, the first coed dorm, Willard Hall, was established. Today, the building houses 111 upper-class students. 3


In 1965, a new dormitory was built on Sunken Road and named “Russell” in honor of the College’s former President Russell.1 Continuing through 1977, Russell Hall was an Upperclassmen residence hall. As quoted in University of Mary Washington: A Centennial History, 1908-2008, both Russell and Jefferson halls acquired a personality described in the 1977 Bullet as, “Household words at UVa, U. of R., and Randy Mac. The ladies there are the darlings of the preps, and on most Friday and Saturday nights their dorm is the scene of more passes than a school of quarterbacks.”2


Randolph Hall, and its sister dorm, Mason, was constructed during a five-year building boom that began in 1950, and it was completed in 1954. 1  It was named for Martha Jefferson Randolph, daughter of President Thomas Jefferson. It recently underwent renovations and was reopened in Fall 2012 as a freshmen residence hall. 2


Marshall Hall was built in 1960 and is a 144 bed residence hall. The building was named in honor of Mary Willis Ambler Marshall, wife of the esteemed Chief Justice John Marshall. Located at the bottom of “Marshall Hill”, below Russell Hall, Framar House, and South Hall, it is considered one of the more secluded dorms on campus. 1


Jefferson Hall opened in 1967, could house 195 students, and was named for Thomas Jefferson.1 The residence hall included several innovative features such as “the campus’s first dorm elevator, a cluster arrangement of rooms that included kitchenettes, and a number of single rooms for students who desired privacy.”2 Continuing through 1977, Jefferson Hall was an upperclassmen residence hall. As quoted in University of Mary Washington: A Centennial History, 1908-2008, both Jefferson and Russell halls acquired a personality described in the 1977 Bullet as, “Household words at UVa, U. of R., and Randy Mac. The ladies there are the darlings of the preps, and on most Friday and Saturday nights their dorm is the scene of more passes than a school of quarterbacks.”3

Jefferson Hall today is a co-ed, freshman residence hall that houses approximately 192 students. The residence hall has both double and triple rooms with hall bathrooms.4